Sometimes I feel the world really needs a reminder that it has problems, so I'm going to spell out a few of them here. Generally it helps if you have problems spelled out, as humans tend to forget what things are important and just focus on the newest, shiniest phones and apps. Even as a developer, I must admit that apps are not going to change the world. Not really. Not in any REALLY, I mean REALLY important way.

OK, this was a gross generalization, as our precious phones and apps all help us to lead better and more comfortable lives in some way. You can connect with your long-lost friends. You can send messages to people more cheaply. Of course, sometimes these wonders of technology will save somebody's life. This is all great. But I sometimes feel that humanity in general has lost sight of the fact that there are REAL, bigger problems in the world.

Water crisis or water scarcity means that there's a huge amount of people (even as high as 2 billion) that don't have access to clean water. There's a huge amount of people that don't have enough for their daily needs. "One in five people in the developing world lacks access to sufficient clean water (a suggested minimum of 20 litres/day)" (source - Food and Agriculture Organization of the United Nations).

Projections of population growth predict that by 2024 world population will reach 8 billion and 9 billion by 2040. (wikipedia). Humanity must work hard to ensure that there will be enough clean water for everyone.

Currently, there doesn't seem to be a global scarcity as such, but there are regions that are very short on water. So, basically, humanity is currently simply unable to govern properly all the water resources on this planet. For example, one in five people in "developing world" don't have access to enough clean water, while citizens of Europe and US have access to more than necessary.

If you add to this that there are a lot of factors that contribute to water crisis, and not the least important of those factors are degradation of surface and underground water quality which comes from pollution you see that the projection "By 2025, 1 800 million people will be living in countries or regions with absolute water scarcity, and two-thirds of the world population could be under stress conditions." which you can find on FAO site doesn't seem so far-fetched.

Possible solutions would be technological, such as desalinization, which is at this point still considered very expensive and simply administrative, such as better water resource planning and management. It is clear that collaboration between all sectors of human endeavor is necessary and bot on local and international scale. There's also a need for the industries to increase their efficiency when working with water, which means that industries should through more efficient processes get more things done by using a smaller amount of water.

Global warming is a FACT. It's not a theory, it's not conjecture. There's evidence for the fact of global warming. Plenty of evidence. We'll get to it in a moment. Why do some people doubt it? Because their view is limited to a small scale, which almost always comes down to "the winter in my city was very cold, there's no global warming" / "the summer in my city was not so hot and it was constantly raining. there's no global warming." You have to look at the climate trends GLOBALLY. Your city is but a tiny speck on this planet and is not representative of anything. 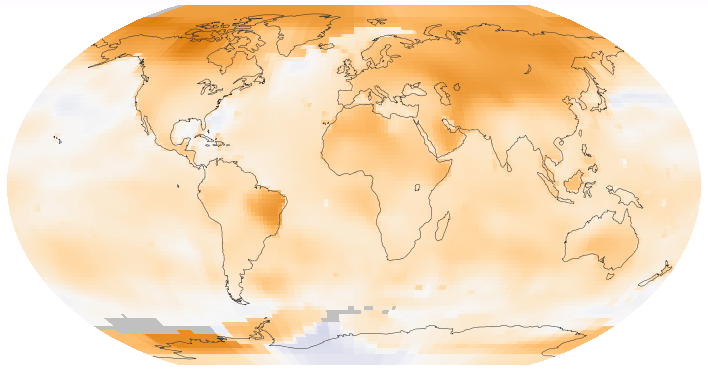 As a matter of fact, the first half of 2016. was the warmest half-year globally since 1880., when this kind of temperature recording started. Each month of this year was the hottest month on record.

But tracking temperatures across hundred-something years is not the only way scientists know that global warming is real. They also analyzed ice cores which they drilled from the depths of ice on Greenland and Antarctica. These ice cores extend back up to 800 000 years and contain information about past temperatures. Basically, ice contains bubbles of air that are actually a sample of the ancient Earth atmosphere. This enabled scientists to directly measure the contents of the ancient atmosphere and they showed that the CO2 contents in the atmosphere was stable until the 19th century. For more information about this method visit the British Antarctic Survey site. There's TONS of other evidence for global warming, such as reduction of ice in Antarctica, rising sea levels, heat waves, loss of plankton, migration of diseases to warmer regions, etc, etc. When they have this much evidence, it's no longer a debate. It's a FACT.

And we humans are the reason for it. We are essentially creating a mass extinction event on Earth. Global warming / climate change that is currently happening is man-made. We did it by burning fossil fuels. As we burn fossil fuels, Carbon Dioxide is emitted into the atmosphere. This CO2 collects in the atmosphere and absorbs sunlight that would otherwise be reflected off the Earth's surface into space. The pollutants we released in the atmosphere trap the heat and make the planet hotter.

So, what is there to be done? Humanity needs to work for a positive change in every aspect of humanity. We need new technologies, ones whose byproduct is not CO2, such as hydrogen technology. Increasing the production of electricity from wind and solar power, would also help. Even increasing energy efficiency of current technology is helpful. Even when cities switch to a greener public transportation systems, it helps.

3. Ignorance (Poor Education Systems, or almost none at all)

Information Technology has changed our lives, made information more accessible, connected us with others from around the world. It enabled us to question everything. Yes. This is awesome.

But in spite of all this, in spite of knowledge being so easily accessible, there are a large amount of people in the world that are ignorant about the World, our place in it and basically universe that we live in. Here are some facts that show ignorance is very, very much rampant in the world:

There are still people who seriously think that The Earth is FLAT. FLAT!!

And they have a "society" ... and twitter ... and website. Seriously, I'm not making this up. People think that the Earth is FLAT!

Anyway, here is the Vice article with a few bits and pieces of wisdom from a guy who talked to them on their forum. Really, enough said.

Between 1982 and 2014, successive surveys have found that between 40% and 47% of adults in the United States inclined to the view that "God created humans in their present form at one time within the last 10,000 years" (wikipedia)

Look, I'm not saying that religious freedom shouldn't be a choice, but this is just STUPID. When science proves something, it's no longer a matter of belief, but a matter of FACT! Science has proven, over and over that Earth is 4,5 billion years old. But these people believe that god waved his magic stick and created humans 10000 years ago, and humans that have modern-day anatomy, mind you. This is so-called Young Earth creationism, and as you can see it's rampant in the US.

Only 39% of Americans say they believe in Evolution. 25% of all people questioned do not believe in Evolution at all, while 36% have no opinion. Well, it kind of makes sense, if you take a look at the amount of people who believe that 10000 year thing.

There's an astonishing amount of both fossil and genetic evidence which effectively makes evolution a FACT. Both scientists and us regular people can take a look at fossil records, and actually see with our own eyes the evolution from one species to another. Not only this, but with the rise of genetics, there's an overwhelming amount of genetic evidence of all species actually being part of one family.

Huge amount of people believe that the Sun is orbiting Earth

A National Science Foundation study involving 2,200 participants find that about 25 percent of Americans got this question wrong: 'Does the Earth go around the sun, or does the sun go around the Earth?'

This must really be a flaw of the educational system in all countries. They teach you to have in your head all the dates when this happened and when that happened and they fail to teach you fundamentals of our world and universe.

Please, please ... go out and spread the word that Earth is orbiting the Sun. It might be news to your friends.

This was a list of few problems where a few of them where apps will not help us. Sure, they can and help spread awareness, but we still need solutions, people. And we need them fast. And we're not gonna get solutions if everybody's just staring at their phone. Go and try to make a difference. Try to educate, inspire and contribute.

Other Sites by the Same Author